Shiba Gaijitsu was the ruling samurai of Koso Mura in the Naishou Province. A strong adherent of the Tao Gaijitsu hoped to turn the town into a center of Enlightenment for the whole Empire. In 1198 the Phoenix governor of the Naishou province died under mysterious circumstances. During the time the Scorpion and Crane Clans fought to take control over the province, Gaijitsu kept his forces on the defensive inside the town. When the new Imperial Governor arrived he confirmed Gaijitsu in control of Koso Mura, and lent him Lion reinforcements 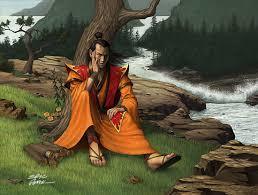